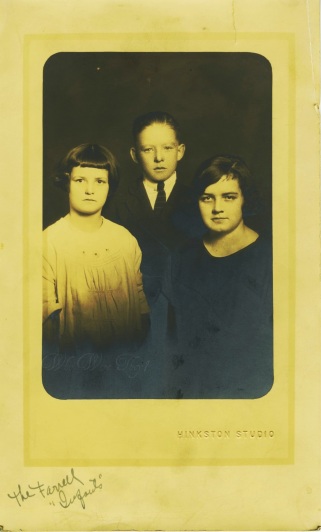 Looking a bit yellowed, here is a nice portrait of three children, labeled “The Farrell Infants” by someone, in pencil. I read it as tongue-in-cheek, as though the recipient of the photo thought of these kids as quite young, only to find they had grown in the blink of an eye. It could also be a nod to the novel Les Infants Terribles by John Cocteau, which features two siblings who basically are horrible and hurtful to one another. There is a lot more happening in the book, but I shan’t go into it here.

The photographer was Hinkston Studio. I found a reference to a Hinkston Studio in Michigan, which then led to a 1922 Northwestern High School yearbook from Detroit, MI.  This further led to a reference to a 1938 photographic convention in Chicago, in which Mrs. Eva L. Briggs of the Hinkston Studio was either managing lectures or presenting lectures, on reception room management, business promotion and telephone solicitation (listed in The Focus, v 14 1938 – v 16 1940). The studio is also listed among known Polish businesses in Detroit by the Bently Historical Library at University of Michigan, within the Edward Martin collection of materials (covering 1852-2004).

UPDATE: Well, I really ought to look at the backs of the photos before I post them! I just found the names of these three: Betty, Dick, Rhea Marian. Dick was probably Richard. With this information, I turned to Ancestry and found Richard W. Farrell, born about 1913 in Ohio. Sister Rhea was born in about 1910 in Montana, and sister Elizabeth “Betty” was born in about 1914 in Montana. Their father was Bert M Farrell born about 1881 in Ohio, and mother was Clover “Cloe” born about 1884 in Ohio. Bert gave occupations of civil engineer and poultryman in the two census documents I found, which is incredibly diverse. In 1920 and 1930 they lived in Detroit. Also, in 1920 when Bert was a civil engineer, they had Kent P Anspaugh (sp?) and Neil C Anspaugh living with them, who are listed as Bert’s brothers in law. Both were born in the 1890s.

After this, it’s difficult to trace Richard and family because “Richard Farrell” was a popular name in the 1910s. I found one Richard W Farrell living in San Diego, CA in 1940 with wife Eleanore and daughter Jo Ann. This Richard was a Navy officer. Another Richard W Farrell lived his life in Ohio married to Edith and was buried at St Mary Cemetery in St Bernard, OH as a WWII Army veteran.

6 thoughts on “The Farrell “Infants””