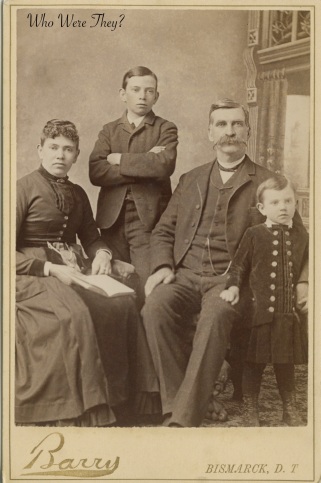 You may remember this photograph from the Red Velvet Album, which we recently concluded. At the time I had called it The Whole Family thinking we might have seen the boys in previous photos. Later as we went through the album I showed you the baby photo of Franklin Francis Ford and that one solid identification has led to the identification of the image above! This is Elias Cole Ford, his wife Belle Kirby Ford, older son Elias Kirby Ford and the four or five year old Franklin Francis Ford.

I have been in contact with the wife of a great nephew of Frank Ford, and she said that her family does have a copy of the photo above, but it’s a poor quality copy and is part of a montage of other images. She also thinks that the photo titled A Sister Surely could be Sarah Elsie Ford who died in 1881. The resemblance of that young lady to the girl with the long hair in Long, Beautiful Hair makes me wonder if that is also a Ford family member.

Happily, Susie Ford will be taking ownership of the Red Velvet Album and working to determine if there are family connections in Pennsylvania. The family definitely was in Dakota Territory as they made their way West. Another happy ending for a lost and formerly wandering photo album!