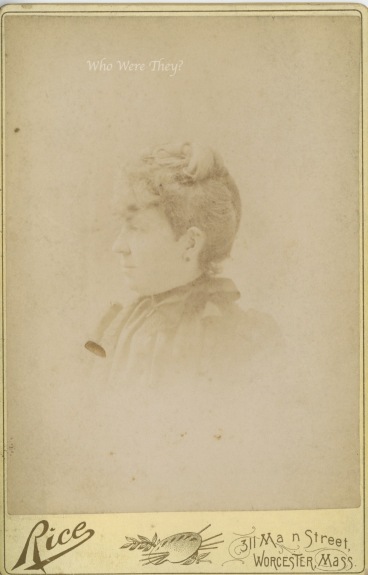 As can happen with vintage photographs, this one is quite faded. Due to storage environment, quality of the original image, and even the chemicals used at the time it was created, many 19th century photographs fade until we can’t really see what they were. This likely was a striking profile photograph of a middle aged woman at one point. As you enlarge the image, you can see she has a nice profile, attractively styled hair, and even earrings.

The photo is a cabinet card produced by Rice in Worcester, MA. According to Langdon Road (a fabulous site with tons of photographer information) it was possibly one of several Rice photography studios just in Worcester. There was A. L. Rice, Frederick W. Rice, George M Rice, and Rice Bros. all just in the town, and this doesn’t count the numerous Rice photography businesses in Boston. I’d venture to guess that A. L. and George comprised the Rice Bros. at some point. Further digging revealed that A. L. Rice was in business at 411 Main St in 1872, Frederick Rice was in business at 416 Main Street in 1908, George Rice was in business at 419 main Street from 1872 through 1887, and the Rice Bros were in business at an undefined location in 1871. Given that there isn’t a first name we have to turn to clothing and hair styles to try to date. In this case, with the faded photograph not showing us much, I can only stab at “1870s” as the general era.

I’d venture a guess that A. L. and George were the Rice Bros, then they split into separate studios as they grew their business, and then Frederick is the son of one of them.