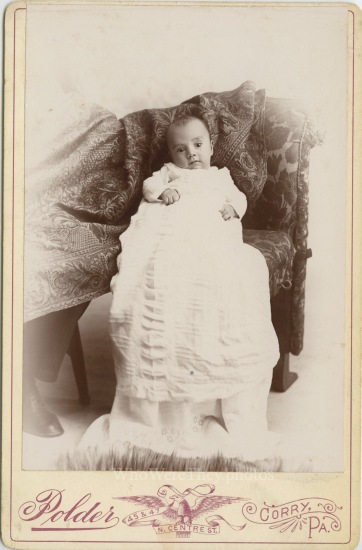 Photographing babies in the 19th century was considered a specialty, and some photographers had it, some didn’t. This particular set up is interesting. Compared to the previous baby photo that featured a baby sized chair, we more often see hidden parents or babies propped precariously in chairs. In this case, looking at the left of the image, you can clearly see the foot and leg of an adult male. Then there’s all the fabric draping around the chairs. I suggest this is a hidden parent stabilizing the child underneath the blanket. The baby is wearing a long christening style gown. In research I did for a project on babies, I learned that often times baby dresses were long during the infant months. It helped to contain children as they were difficult to crawl in. Once the child was crawling, the dresses were exchanged for shorter length ones. Also of interest, baby dresses were sometimes made from women’s petticoats as a means to save on fabric, and of course dresses were saved for additional children that were expected, shared among family members and friends.

This sweet baby was photographed by Polder in Corry, PA.This town is somewhat southeast of Erie, PA and was the home to a locomotive factory in the late 19th century. The population has been relatively stable over the past hundred years, with the 1870 census reflecting 6726 residents, and the 2010 census reflecting 6618.