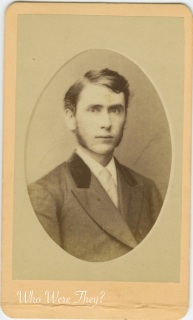 Shown here is a young man who must have been proud of his side burns. They extend from his ears along his jawline, but do not meet in the middle. There is potential there though. He has a strong chin, so there wasn’t a reason to hide it, but I imagine later in life his beard covered his neck, sort of like a feedbag, heh.

This photo in slot 4 of the Leather CdV album was made by B. W. T. Phreaner of Hagerstown, MD. Bascome W. T. Phreaner (1845-1932) operated in Hagerstown at 4 Washington Street, at Potomac Street. Hagerstown to Cumberland is a section of the Cumberland Road, a distance of 69 miles.The road was begun in 1811 and was the first national road project in the US. You can read more about the road at this great site I found during research for this post.

One thought on “Side burns”