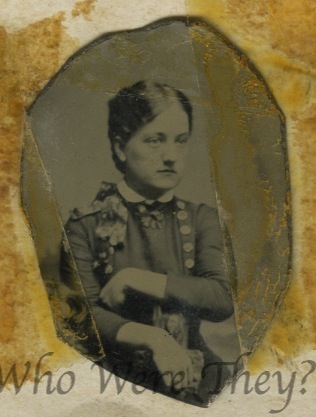 A much later date

This particular gem tintype was added to the Red Gem album after all the pages were filled – making me wonder about the duplicate images and why the owner didn’t remove one of those. The image was also obviously cut to the general shape of an oval, so perhaps it was going to be used in some other way and as an afterthought was added to the album. The tape has damaged the finish on the edges but fortunately the beautiful face is intact. The clothing looks to be from the 1880s and is lovely. Notice the asymmetrical details – buttons on one side, ribbon on the other. She appears to be leaning on something that looks like it could be the back of a chair, but it’s much too narrow. So, I am going to conclude it was some sort of prop used for these types of poses.

Well, that concludes our look at the Red Gem album and nary a name to be found. I have two more gem albums, a bunch of interesting CDVs and tin types, and of course many more cabinet cards to share with you. See you again soon!

6 thoughts on “A late addition”