This is an image of a lovely young lady, identified as Donna Anspoch. I found quite a lot of information about Donna which might be helpful in the future, as there are a lot of people in the family tree and a few people named in this packet of photos. You can just see the edge of the photographer name in the upper left corner of the matte, plus there is an embossed logo in the lower center. But, the matte was cut to fit a frame and part of the photographer name was trimmed off.

So, this is Donna Anspoch, born November 1, 1888 in Ohio. Based on the soft and round face, this might be her high school graduation photo, putting her around 16 years old and the photo in the early 1900s. That parallels with the fashion choice of the white blouse, Gibson Girl style hair and large bow. Donna was the third of five children born to Levi F and Minnie Grafton Anspoch.

In 1914, Donna was a member of Phi Chi Sorority at Ohio Northern University. See this great photo of the small group of women. This was a very popular thing to do at the time – start or join a sorority at college. There is a fraternity called Phi Chi that is a medical fraternity, but I don’t think these ladies had a chapter of that organization. There are sororities and fraternities that can exist at a single college and not be affiliated with a national organization. There were also many smaller fraternities and sororities that joined into larger national organizations. Either of these could describe the Phi Chi group pictured. Based on the neckties popular in the photograph, I might revise the date of the Pair of Women photo a little later given that this is 1914. 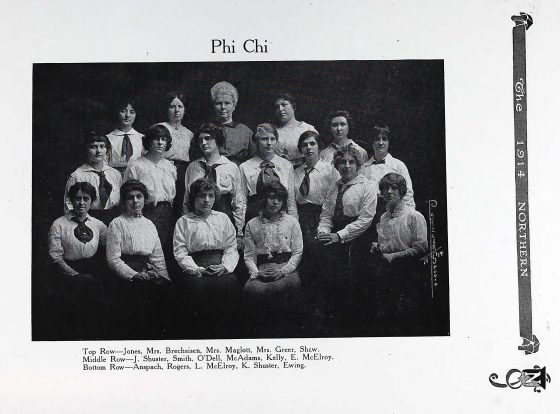 In February 1922, Donna passed away due to pulmonary edema. Yikes. Pulmonary edema is the retention of fluid in the lungs and is one of the main symptoms of congestive heart failure. At such a young age, it seems terribly sad to have suffered in such a way. Donna is buried at the Armagh Cemetery, Armagh, PA. Donna lived in Columbiana, OH at the time of her death, which is about two hours away from Armagh, PA on modern roads. There may have been good reason to inter her there, including possible religious connections to the area. I haven’t found any yet, but I’ll keep searching.

Stay tuned for other family members. Donna did have children as did her brothers, so this packet of photos is likely from that group of people somehow.