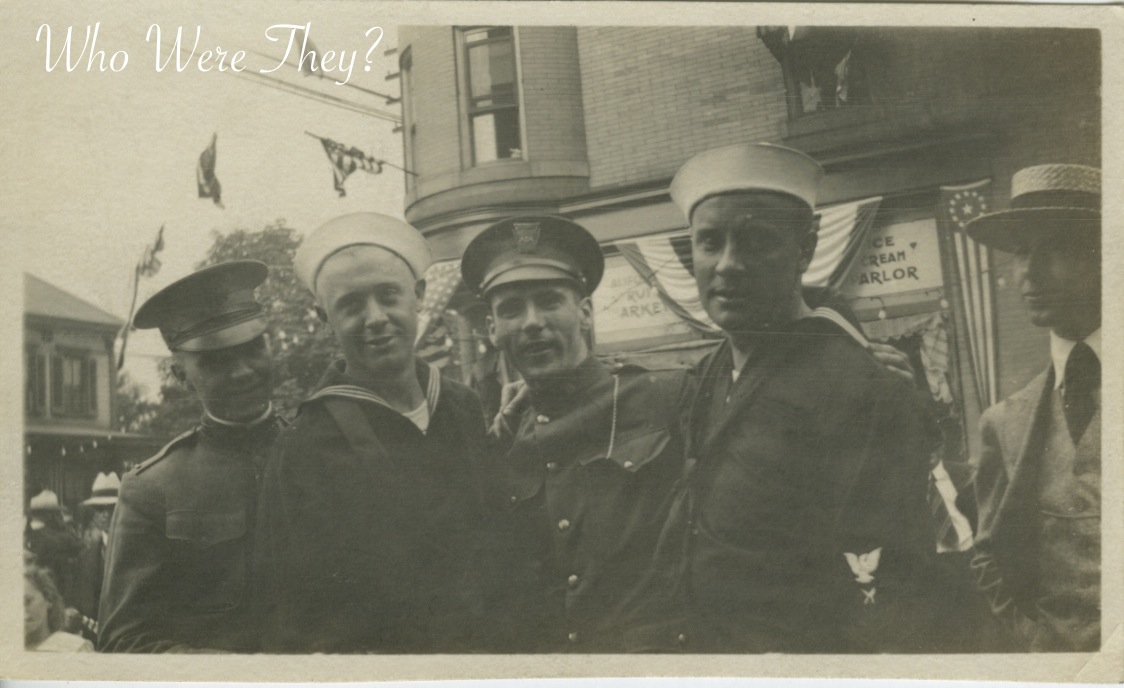 For this week’s Sepia Saturday post I really tried to figure out where this photo might have been taken, but I really can’t quite make out what the sign behind these four fellows says. We have two sailors and two Army men. They look to be at a celebration of some kind, what with the flags and bunting in the background and a lot of people behind them. The photo isn’t dated but it appears to be a World War II era image. It was *probably* taken somewhere in California because I can make out some of the letters on that sign, and the shop features an ice cream parlor, but other than that…..

UPDATE: some great information was provided by reader Ed: “the man on the far left is a Marine, he is wearing a service dress jacket and hat that was worn between 1908-1930′s , it is noted for its taller crown stance, and smaller upper ring in comparison of the shorter crown and larger ring of those of the 1930s-present day. The man between the two sailors hat insignia I believe is not military, it is a key stone design, and was worn by the Pennsylvania (keystone state) state police, AND I believe thats a whistle lanyard going to his pocket as well. The civilian to the far right is wearing a straw hat, large knot tie and cellulous clip in collar, with a vest and jacket, all in vogue between 1905-early 1930s. The sign on the left side says top to bottom California- Fruit- Market. but I believe with the state trooper this is a Pennsylvania picture, and the ice cream parlor is part of a market that has the very trendy for WWI period hot comsumer prouct of “california grown fruit” , the bunting on the window is very WWI , with the rossette of stars, can’t say I have seen that in WWII pics. The sailors are in their winter uniform (Oct-April?) with the dixie cup hats that were first used in in the early 1900s as well.”

Click through to Sepia Saturday where the prompt suggests crowds, market day, cattle and tea stands.