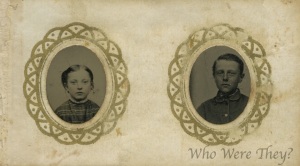 A girl and boy, were they related?

Today let’s start our dive into Victorian Gems. This is the first page as you open the little Red Gem Album. It’s a nice way to start an album, with two pretty children.

It is unfortunate that the scratch goes right across her face but otherwise this image is lovely and well preserved. She has her hair parted in the center as was customary for girls in the mid 19th century. I can’t tell if the hair is short, but it appears there is a tendril poking out from behind her ear on the right. Her dress is plaid which was not uncommon for children. Plaid hid dirt and stains better than solids. The fabric was possibly a wool/cotton blend. The dress also has a fine lace at her collar, befitting a little girl. Based on the dropped shoulder seams of her dress, I’d place this image in the 1860s. It appears also that the photographer tinted the cheeks of this subject to highlight her youth. She looks to be around 8-10 years old.

Her page mate has the side part in his hair expected of boys of the era, and also has an unfortunate scratch across his face. His serious expression probably hides the exuberance locked within while he sat calmly for his portrait. His sack coat is also very common of the period. A sack coat is a catch all name for any coat that was loosely fitted and buttoned at the collar. It could have coordinated with trousers and was likely wool. He has a shirt of some kind underneath and you can just see the edge of its collar behind the folded lapels of his coat. He looks to have been 10-12 years of age. I do wonder if he and the girl were siblings.

No photographers information is included in this entire album, so I am going to forgo stating that in every post.

Leave a Reply to Far Side of Fifty Cancel reply