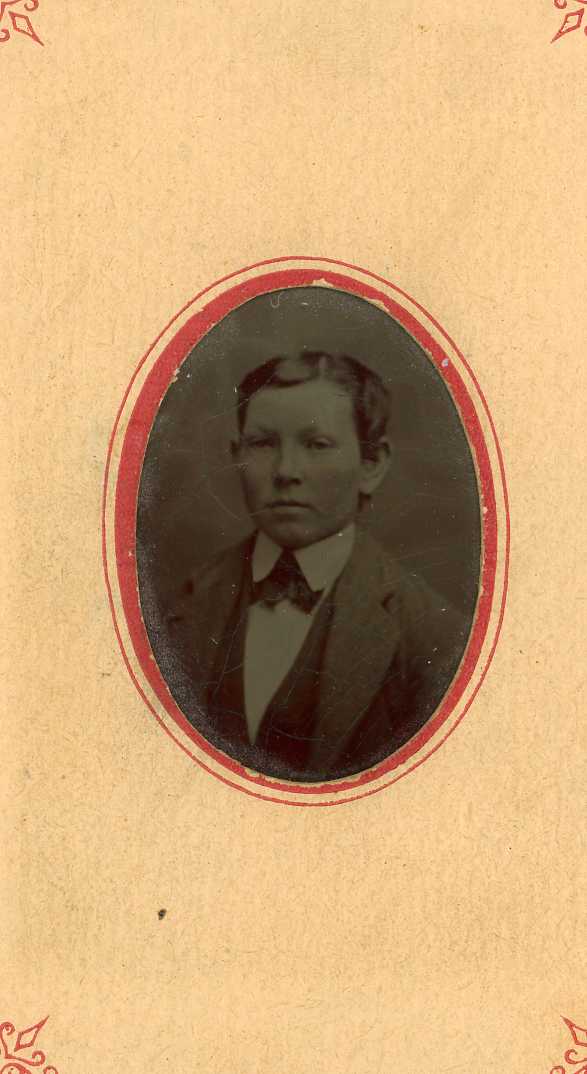 Courtesy of Ray Jackson, today we showcase a tintype photograph of Charles Crane. Because the tintype was popular and available for over 50 years, they can be extremely difficult to date. They do not lend themselves to being written on to identify the subject, and all to often the paper sleeves are long gone by the time we find them in antique shops. This particular tintype appears to be the 1 5/8 by 2 1/8 size, which could be made in batches of 116 at at time due to the repeating cameras that became available around 1862. The camera could produce multiple images from one sitting and helped bring down the cost of tintype photography to below a penny per image.

In this particular case, the paper sleeve is still intact, and written on the back is the name Charles Crane. There was not a photographer’s mark on the sleeve, so this gives us no clues as to where the image was made. One tiny piece of information may be of assistance though. The paper sleeves came into use in the 1860s and ranged from newspaper-weight to firm cards. In the early 1860s until about 1863, the sleeves were very elaborate presumably in an attempt to make the inexpensive tintype look more like it’s pricier cousin the CdV. Those sleeves went out rather quickly and in came the sleeves like the one above. They featured red or other colored ink and some scrolled decoration. They were popular through the 1870s at least. At other times we see the embossed paper sleeves.

Looking at young Charles’ clothing can give us some more clues. The vest style is consistent with a more tailored style that was popular in the late 1860s through the 1870s. In the 1870s, the vest color became consistent with the coat color. I learned that the brocade vests that are so ubiquitous in Western movies and usually worn by gamblers at reenactments were widely popular among men in the 1850s and 1860s, giving way to the solid color vests as seen on Charles above. The coat Charles is wearing is likely a sack suit, which essentially means “loose fitted,” and they are also called walking suits and business suits. This style evolved into the modern three-piece suit. They were introduced in the 1850s but became more tailored in the 1870s.

One thought on “Young Charles Crane”