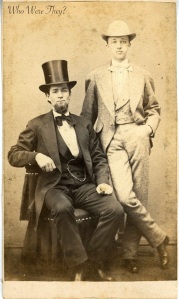 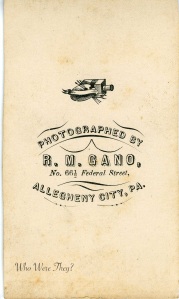 Two gentlemen posing for a photo together. Their faces do not bear resemblance to one another that I can tell. They look as though they are dressed to go to a soiree or the theater, don’t they? Mr. Top Hat has the chin-only beard with no mustache again – what was that all about? – and his friend to the right looks too young to grow a beard. They look like they could cut through a crowd of giddy young ladies like a hot knife through butter, don’t they? Either that or they look like outlaws. :-) The photographer for this pair was R. M. Gano at 66 1/2 Federal Street, Allegheny City, PA. This was a tricky search as there was a Civil War CSA General named RM Gano who was very famous apparently. However, I did find some information on Richard M Gano as a daguerreian in Ohio, 1853-1889. He was also known as a photographer of Civil War soldiers and occupied not only #66 1/2 but also 81 Federal Street. I’m inclined to date this photo a little bit later than the mid 1860s. It still has the square corners but the border is absent.

2 thoughts on “Brothers or buddies?”