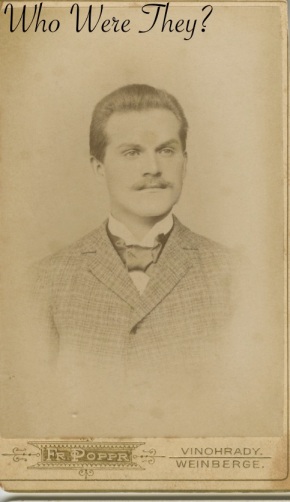 I have a “new” album to work through, but sadly there are no names to be found other than the photographers. So, we shall explore and enjoy what we find, shan’t we. I call the album the “Leaf Album” because it appears to be decoupaged on the cover with roundish shaped leaves. At first I thought it would be a fantastic find – a handmade photo album from the 19th century! But on further consideration, I do not believe it to be antique, or at least that antique. The photo openings are modern sized and won’t hold either a CdV or a cabinet card. However, it was packed with numerous 19th century photographs.

This is one of the CdVs in the album. It is European. Vionhrady is a neighborhood of Prague, Czechoslovakia, and Weinberge is in the wine country of Germany. The two cities are between 4-5 hours apart using local roads, and apparently Fr. Poppr was a photographer in both cities. The gentleman pictured in the photo “looks” European to me. That sounds so unusual, right? Especially from an American where we have every country represented and millions of European descendants, but this man just “looks” European. I can’t explain it.