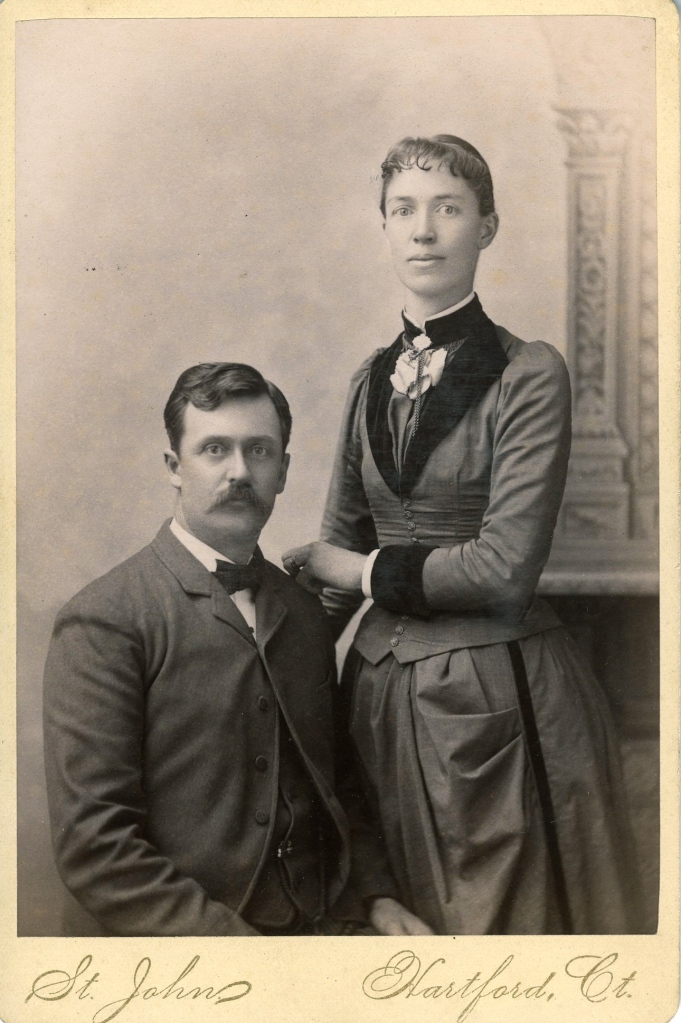 This photo is definitely an earlier photo than yesterday’s photo of Clyde and his mother, but my daughter insisted on a baby photo and it’s tough to disappoint a three-year-old. You can probably now understand why yesterday I commented that Mother looks a little rough around the edges. My suspicion is that this is a wedding photo of Clyde’s parents.

At first I just thought she had a lot of embellishments at her neck, but under a magnifying glass I realized that she has a very thick chain necklace with an unusual square clasp – the only word that comes to mind – in this photo. The clasp is laying on top of the white flower/fluff. In the photo with her baby it’s much easier to see. The only way I can describe this necklace is as a bolo or lariat but that doesn’t feel right.

It is going to be difficult to trace the photographer because there is a very famous church called St. John’s in Hartford, CT. It makes me wonder if this couple were married at the church and somehow the priest was forward thinking and offered a portrait…? Probably a stretch.  What this does tell us is that the couple were from Connecticut and somehow made their way to Kansas. If we ever learn their names, we might be able to unravel their reasons for emigrating westward.

I wonder who they were? Thanks for stopping in.

UPDATE: This couple has been identified as George and Abbie (Streeter) Moses, married January 15, 1880.

4 thoughts on “What were their names?”