Today’s photo was identified as Martha Strune. Probably. The last name could be something else. I did find people on old census records named Martha Strune, so it’s probably correct. Martha has a beautiful dress with much embellishment. The bodice appears to be velvet with a satin inset. There’s embroidered trim added along the neck opening and buttons down the front. It is possible this was a national or ethnic costume of some kind. In my reading of vintage fashion magazines, I find there are often patterns to make these types of dresses, so there must have been something of a resurgence of regional costumes. Martha also has a comb on the back of her head and I imagine it was lovely. Her hair is brushed softly to the back and then gathered into a twist of some kind. 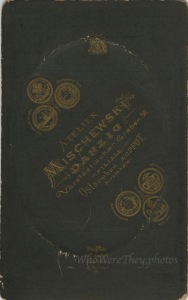 The photographer was Atelier Mischewski in Danzig (Poland). The word atelier translates as an artist’s workshop and many photographers used this term to describe their studio. There are several awards noted on the back of the card, dated 1875, 1876 and some others. Note that the card mount is black. I’m leaning toward this being a funeral card.