A lovely full-length portrait shows off the full sweep of this 1860s era gown. Some skirts during the decade could reach 180″ diameter at the hem, and the fullness was achieved with supporting skirts called cage crinolines or cages. Today we call them hoop skirts. You can actually see in the lower portion of this skirt a slight bulge, which I suspect may be a hoop in the cage. Often times, women would wear several skirts together to create the desired look. Layers from skin out would be: drawers, modesty petticoat, cage (hoop skirt), petticoat, possibly another petticoat, outer skirt/dress. It was not desirable for the hoops to show under the skirt, so at least one petticoat was required on top of the hoop, often two. While all this fabric seems like it would be quite heavy, the foundational garment of a corset helped to distribute the weight of the clothing across the full body, rather than it all “hanging” from the hips. This made the clothing less cumbersome and not at all tiring to wear. And of course, women were brought up dressing like this, so before you say “I could never do that!” remember that you were brought up dressing a certain way that would make our ancestresses exclaim “I could never do that!” :-)

The look for the era was generally a “round” look, meaning the face was round and accented by the hairstyles over the ears, the sloping shoulder seams and wide elbows drew a circle around the bodice, and the skirt width and shape was round. 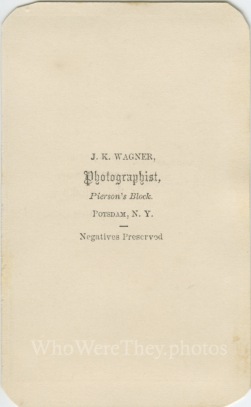 The photo was made by J. K. Wagner in Potsdam, NY.