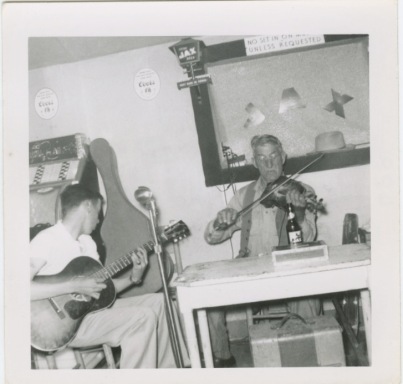 Two unknown / unnamed fellows jam on a guitar and a fiddle. The recess behind the fiddle player has quite a bit going on.  There’s a lantern advertising JAX beer, as well as the letters JAX spelled out in an arch. His hat is resting over his left shoulder. There are several plugs in an outlet over his right shoulder. The placard above all that says “No set in on ??? unless requested.”

The young man on the guitar is playing a chord that I can’t identify. Behind him, the guitar case leans against a jukebox(?). And note the microphone in front of him. The table is beat up, there are beer signs around, and in front of the fiddle player is a bottle of JAX beer. They must be in a bar! I’m taking a stab at this being a bar in Florida.

JAX Beer was made between 1913-1956 in Jacksonville, FL. There are some interesting tidbits about the brewery, including them being the last brewery in the US to stop producing beer during Prohibition, and they are credited as the first brewery to sell beer in a six pack. Not like what we picture, the bottles were packaged in burlap bags. The brewery went the way of the Edsel in the mid-fifties, leaving behind only its building and memories, and this little snapshot.

2 thoughts on “Guitar and Fiddle”