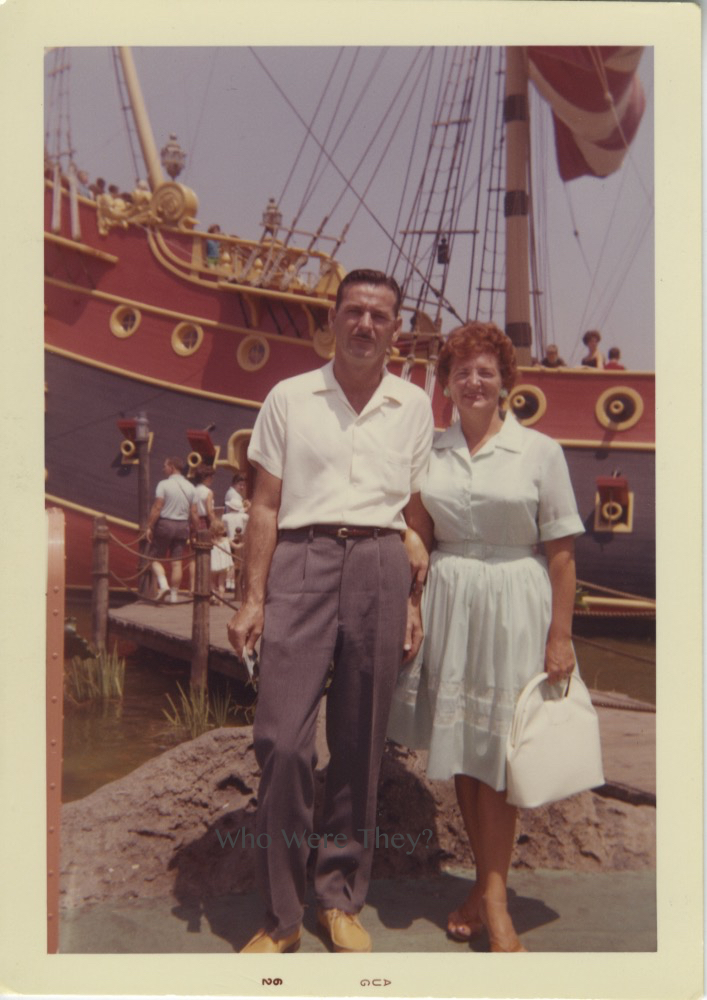 From August 1962 or thereabouts we have two photos from Disneyland. The park at this time was only 7 years old and look how wide open the pathways are! For anyone who has been to Disneyland in the past 30 years, this is virtually unreal. This is back when you could wear a dress and heeled sandals to Disneyland and not be concerned about having your toes stomped on by the crowd or rolled over by a stroller. The attractions pictured are the Columbia Sailing Ship and the Matterhorn Bobsleds ride.

The people featured in these photos are Eleanor Conradson (my grandmother-in-law) and her boyfriend at the time, and his son. No one can remember her boyfriend’s name, unfortunately. My mother-in-law told me there was some story about his family, but she couldn’t remember the exact details. Either he or a daughter were murdered in some sort of robbery! The people who knew their names are long gone from my life, so I have no way of learning more.

At this point in the game, Disneyland was in the shape that most of us are familiar with, as you can see in the images below I found online. Click the images to open and enlarge.

You will see the “Rivers of America” in the top left of the drawn map. It clearly was in place by August 1962 for the Columbia to be operating on it at the time of the snapshot above, but interestingly in the early ’62 photo, the Rivers are dry and unfinished.

It is very interesting as a local native who has watched a lot of the county be developed to have evidence of just how open Orange County, CA was when Disneyland opened. Compared with how it is now, this is like another country. All of the open spaces on the aerial photos have been completely developed with homes, businesses, apartments, freeways, and much more. The one big hotel shown – the Disneyland Hotel – is surpassed by massive hotels on every side of the park. It really is a tourist mecca.