Sorry for my absence, I hadn’t realized it had been so long since I posted last! Yikes, it is funny how time gets away from us so quickly.

Today, let’s look at these two young women. I have heard recently that the early photographic techniques tended to add age to the faces of the subjects due to limitations in what the camera lens could see clearly. I don’t know which is better, adding age or 10 pounds! Anyway, these two ladies appear to be in their early twenties, although the one on the left *looks* like she could be older. Likely she isn’t. 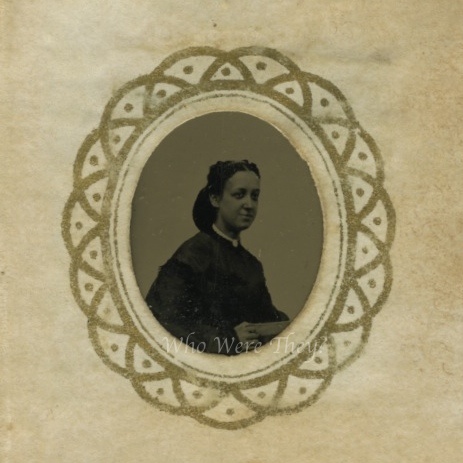 The dress shows features of the 1860s, but the hair looks 1870s. This is likely a later 60s image. When you enlarge the photo, you can see the fringe across her bodice in a shallow V. Also visible is the collar detail. The bodice has a folded collar of a darker color, with a narrow white stand collar inside. This is indicative of post-war fashions, as during the war, the bodice was made with a jewel neckline (simple rounded edge) and a white folded collar was basted directly onto the dress. Here the folded collar remains, but the basted white collar is a small band. Both types of removable collars served to protect the garment from the oils and dirt of the skin, and could be removed for washing. The dress itself was likely spot-cleaned when needed and air dried for freshening. The hairstyle here is parted in the center, but the side fronts are boosted toward the top of the head rather than lower toward the ears, as was popular in the 1850s to early 1860s. 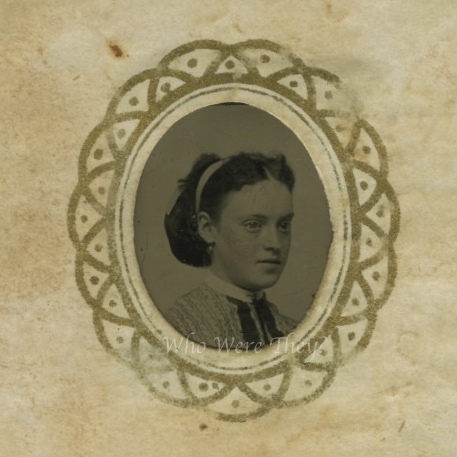 This young lady shows her youth in her soft face, but she is still a fashionable young woman. Her hairstyle is simple – center part and pulled back into some type of arrangement, but also featuring a band of some type, possibly a ribbon. She doesn’t have her hair in a ponytail as we might expect to see on someone her age today. The rounded edge of her chignon is too smooth. However, she does have a ribbon tied on the back, which shows her connection to youth. Her ears are pierced and she is wearing moderate size dangle earrings. Her dress also has a standing small band collar, and she has a small bar pin at the throat. The darker trim of her dress reminds me of a string bow tie, but it appears to be part of the fabric of the bodice. I’d put this one in the early 1870s.