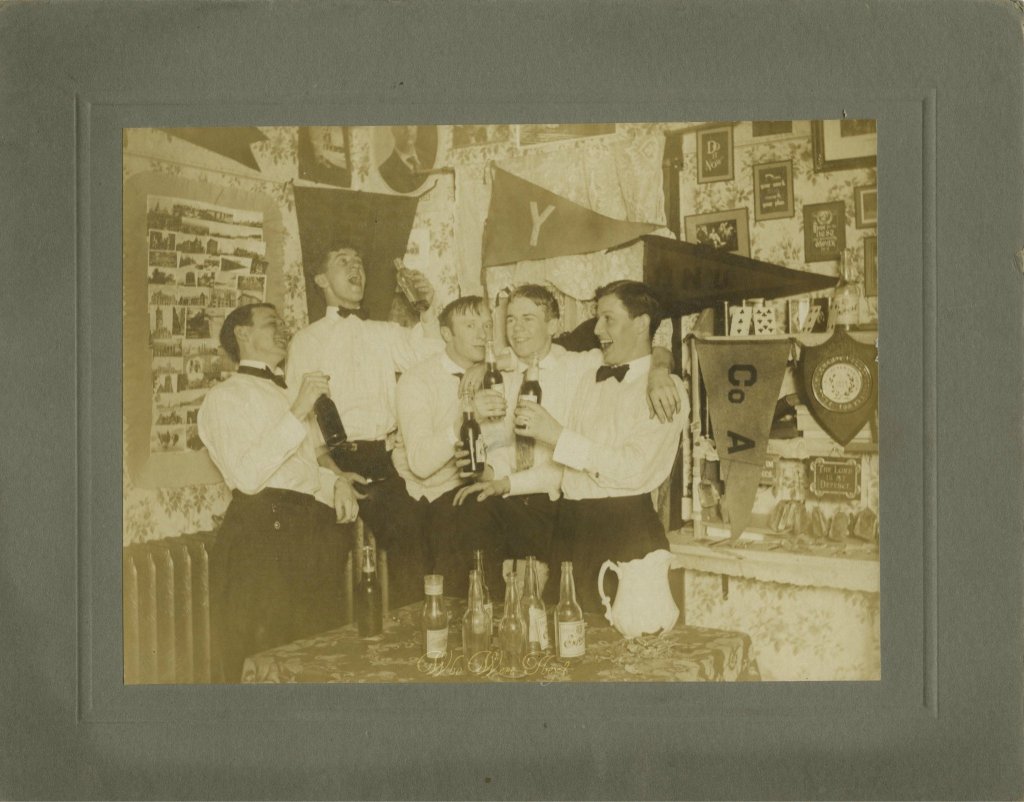 I just love the idea of this photo being an early fraternity party photo, although it looks rather tame compared to some of the fraternity parties *I* attended in the 90s! Initially I thought it might be a Yale photo on account of the large Y pennant. Looking closer though, I think it is located somewhere in Ohio, and may not be a fraternity photo after all. While the boys sing merrily and toast one another, lets take a closer look at the photo. Click below to enlarge.

A. This pennant starts with CH or OH

B. This pennant says BNU or ONU

C. Various work-themed plaques on the wall: Do it now; Plan your work and work your plan; Hope for the best but plan for the worst

D. Religious themed plaque: The Lord is my defence.

E. Unopened bottles! Those all have caps on them.

F. Full bottle of whatever it is; clear liquor so possibly vodka or gin. Yet, also unopened.

So in conclusion, I think this is a staged photo! What with the unopened bottles of beer and liquor, and the fellow in the middle looking a bit anticipatory of the scene’s conclusion, I think these boys stumbled upon the remains of a great party and decided to ham it up. Maybe it was for a fraternity, or men’s fraternal organization such a the Elks, designed to show what a good time they have when they get together. Who knows, there is no identification on it that is clear!

UPDATE: Thanks to reader lissajuliana, we know this is probably somewhere in Lebanon Valley, PA. See the comments for more detail. Thanks!

4 thoughts on “For he’s a jolly good fellow!”