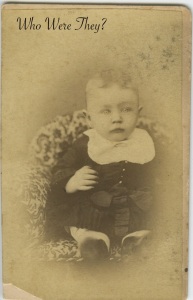 Here’s a wiggly Rudd, McGinnis, Colter or related child. The back of the CdV originally identified the child, but unfortunately someone cut the photo to fit into something and only the top swirls and peaks of an M and maybe an L remain. The baby boy was photographed in the Photographic Parlors in the Downey Block, 221 Main Street, Los Angeles, California. I did find a reference to Godfrey’s Photographic View Rooms, in the Downey Block and in business as early as 1870. The Downey Block was at the same intersection as the Temple Block, which housed the photographer of this couple, making me wonder if they are the wiggly boy’s parents.

In the previous post, I gave you a brief history of the Temple Block and so today I will tell you about the Downey Block. Apparently back in the day, it was “the thing” to build an industrial & retail building and name it after yourself, calling it a Block. While the Temple Block was named after Jonathan Temple, Irish immigrant and former California Governor John G. Downey built the one covered here today. Some notable details about Downey include the fact that in 1860 he was the youngest governor of California to be elected; he was the only governor of California to have been born in another country until the election of Arnold Schwarzenegger in 2003;  he maintained California as a Union state during the Civil War even though he was a Democrat and his counterparts disagreed heartily with him; he served in a variety of local political offices before heading to Sacramento, where he became the Lieutenant Governor, and then in 1860 was the first Southern Californian to be elected Governor; after returning to Los Angeles, he cofounded the Farmers & Merchants bank, the first successful (and still prospering) bank in the area; as if that wasn’t enough, he pioneered subdivision of land for housing – creating the town of Downey, and donated land for a university, just a small one named University of Southern California. During all this, he built the Downey Block. The Block housed a variety of businesses, including photographers, furniture sales, druggists, auction houses, and many others. It was built sometime around 1870, as businesses advertised their location in the newspaper as early as 1871. It was demolished May 1, 1904.

One thought on “Cute baby boy”