Recently, I acquired a photo album that dates back to the 1860s, during the time when CdV portraiture was really taking off and photo albums became more common. The carte de visite (CdV) became available in 1859 and thrived throughout the following decades. Numerous soldiers engaged in the American Civil War took the time to be photographed in their uniform for family and loved ones to see them looking “just so,” and young ladies and gentlemen after the war took the opportunity to present themselves in the best possible fashion to their friends and prospective beaux. 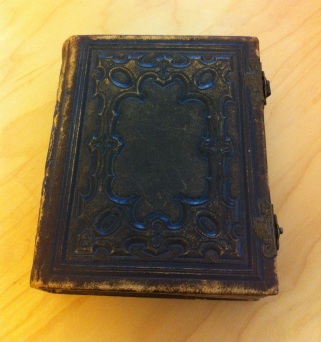 Of course, any photo album can be used long after it was made or acquired by the owner, and so we often find photographs that are “younger” than the actual age of the album held lovingly within the gilded openings. This particular photo album is one such. It has openings for 30 CdVs, with approximately half being of the 1860s and the rest having been made in the 1870s. And of the 29 images enclosed within its leather binding, only one has a complete name. Truly a shame!

The album probably had a chain or handle of some type that attached to these side clasps. You can just see a shadow going down the middle of the gilt, in between the two clasps, although I don’t know what was there. The clasp on the right has a pair of interlocked rings, but they are missing from the left side.

The leather is tooled in intricate scrolls and turns, gilded in places, and even the spine is lovely, displaying the pride in workmanship as well as the pride of ownership that was more evident 150 years ago. A person would have been proud to have this spine showing on his bookshelf. The album itself is approximately 4.5″ wide by 5.5″ high and only about 1 1/2″ thick. The inside leaves are buff white with gilded openings, each page holding one photo that slides in from the bottom of the page. Very few pages are torn (which is common with old albums) and the photos are arranged in such a way that mostly alternates male/female photos. Many of the photos were made by the same photographer in Cumberland, MD so they are likely related in some fashion. We will go through these photos over the next few weeks, but I will start you off today with image number 1. 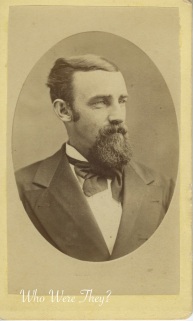 An unidentified man, photographed by T. L. Darnell of Cumberland, MD. I found a record of Thomas L. Darnell (1826-1908) having been a native of Maryland, and he was also well known as a stereoscopist in the 1890s. He was the preferred photographer for the people in this album and we will see many over the course of the album.