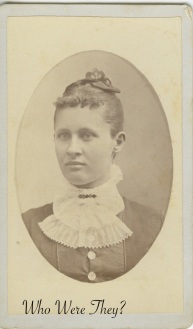 The CdV above shows a pretty young lady with quite a few flourishes to her ensemble. First, she has her hair styled in some type of chignon  with a fancy comb or peineta visible that would have been lovely when seen from behind her. Then she also has a fabric bow on the very top of her head, plus little frise curls at her hairline. Her dress is modestly styled and she has added a lacy jabot with a high frilled lace collar and a delicate bar pin.

The chignon [she-nyon] style is generally a twisted arrangement for the hair. Today it is known as only one style, but in the 19th century, hair was elaborately twisted and arranged, using braids, curls, rats or puffs, false hair and even fine wire frames to achieve the desired look…and it was all called a chignon.

The peineta is most well known as an elaborately carved or styled comb that supports a lace mantilla. In the 1880s, they were very popular with middle class women and used as a decorative embellishment for the hair. Historically they were carved from tortoise shell, but today they are generally made of plastic.

Her frise curls were likely achieved with a tiny curling iron, similar to what women used today, but heated in the fire. Ow! They were most popular with young women, but older women trying to hold on to their youth also adopted the look.

The jabot was introduced for men in the 17th century, and by the 18th century had achieved prominence as the definitive style of neck cloth for men of fashion. They were popular from kings to pirates. By the 19th century men moved on to bow ties and neck ties, and in the 1880s women adopted the fashion. Originally a jabot was simply strips of lawn or cambric stitched into the center front closure of a man’s blouse. As they evolved, they became a separate item, such as a neck tie. The jabot could be made as part of the garment or detachable. Some very fine examples exist that show how prized they were, being made from the finest laces, embroidered silk, tatted and more. They were quite often fastened to the neck of the bodice and held in place with a pin such as in the photograph above. In typical French irony, the word jabot translates as “that bit of skin hanging down a turkey’s neck.” While the jibe worked perfectly when dressing men – and in particular men of the baroque period who tended to um, overdress – with women it could be derogatory, except that fashion has its way of ignoring the meaning of a word after a while, now doesn’t it.