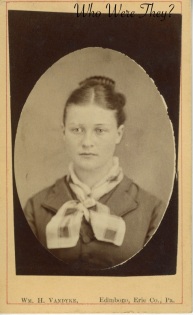 Here we have a CdV that I believe might be from the 1870s. It is not labeled. The woman is attractive with a pretty scarf around her neck.

The photographer was William Henry VanDyke, originally from Wyoming (b 4-27-27). His parents were from the East, and at some point it appears the family returned east and settled in and around Erie County, PA. In 1850, William was a farmer, but by 1870 he had relocated to Edinboro where he bought an established photography gallery. He was included in a biography of residents in 1884, at which time he was still thriving with his third wife and son in business with him. He sired a total of nine children, three of which died in infancy, from his three wives. Interestingly, the biography notes that his two previous wives were remarried, suggesting that each union was dissolved through divorce. We hear so much about divorce being taboo in the 19th century, yet here are two examples with the same groom!

I do wonder if VanDyke capitalized on his surname. There was a photographic process popular in the 19th century called a VanDyke print. It resulted in deep brown colors (see above!) similar to those used by the famous Flemish painter VanDyke. However, I haven’t been able to determine how well known it was. Photography buffs can click through here for an instructional page with a video on how to create the solution.