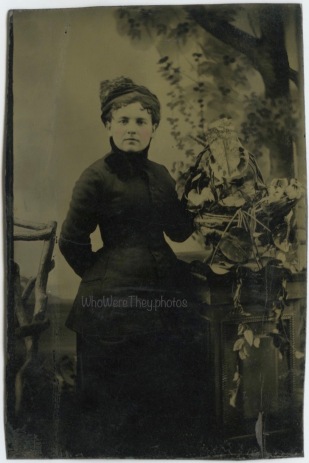 Today’s image of a young woman features a variety of foliage and props. I have read that the more “stuff” is in the image, the later in the 19th century the image likely was made. I think, just going by the silhouette of the subject, that it might be in the second bustle period (1885-1890). The reason for this suspicion is the extreme wideness of her hips in contrast to her waist. The bustle in this period was larger than the first bustle period. It’s a total guess unfortunately because we can’t see any of the dress with clarity. She also has a small bonnet, which often was used as a counterbalance to a large skirt. It is possible there is fine tinting on her cheeks, but it could also be my eyes playing tricks on me. What do you think?