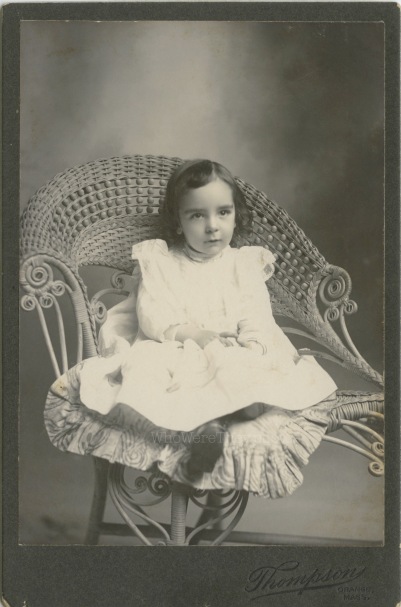 Right at the turn of the century, young Harold Davis sat for his photo to be made at the Thompson studio in Orange MA. Orange is almost directly West of Boston in Massachusetts on the 2, and near to Warwick and the New Hampshire state line. Settled in 1746 and named for William, Prince of Orange, it was incorporated in 1810, and thrived as a farming and small industry town. The New Home Sewing Machine Company operated there manufacturing the revolutionary home economic devices. By 1900, another revolutionary factory had opened, that of Grout automobile company. The owners of the Grout automobile company were set up in business by their father, who had worked at New Home. The company manufactured steam engine autos between 1899-1912 when the ultimately went out of business.

I found a record for young Harold as well. Born in 1897, Harold E Davis was the son of Fred & Nellie Davis of Orange. Fred was a machinist at a foundry. By 1930, Harold had married Eva (or Veva depending on the record), and they had a daughter named Mildred. Harold was also a machinist, like his father. In 1940 he was a laborer in a drill factory, and the family had grown to include Arlene, Helen and Bernard. The also had living with them a maid, two lodgers, Harold’s mother and Eva’s mother. For those keeping score at home, that’s 11 residents in the house. He lived in Orange until his passing in 1983 at the age of 85. His wife Eva lived 1906-1993, another long and hopefully full lifetime.

The back of the photo says Harold E Davis, age 3, January 15. The year is illegible due to the paper that became stuck to the back, but we know he was born in 1897, so this is likely in 1900.