This series of photos come from the photo album my father-in-law kept while he was in the Air Force. I don’t know exactly where he was stationed, but at some point, he and his friends were in Oklahoma. While there, they visited the Will Rogers Memorial Museum and Birthplace Ranch. Will Rogers was a pioneer of vaudeville and early Hollywood, gaining fame first as a trick roper, and later as a humorist. He had intended to retire to Claremore, OK with his wife and family, and had purchased a large piece of property there. After his death in a plane crash in 1935, it was decided that a memorial would be created. During the Great Depression, raising funds was difficult, but people gave pennies, nickels and dimes to help fund the purchase of the land and set aside funding to build the museum. After the state of Oklahoma set aside funds to supplement the grass roots campaign, the museum was finally built in 1938. 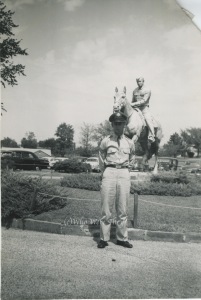 These two photos were taken in front of the original location of this statue. It is a casting of the “Riding Into The Sunset” statue (sometimes called Will Rogers and Soapsuds) made by his friend Amon G Carter. The original is located in Fort Worth, Texas at the Will Rogers Memorial Center. There are two other castings of the statue, located in Dallas and Lubbock. The statue was moved later to a location near the tomb of Will Rogers and his family. I can’t nail down a date of when it was moved, but I know for sure it was after Ray visited, so after 1953. The new location also added a high pedestal under the statue, likely to prevent people from climbing on it. 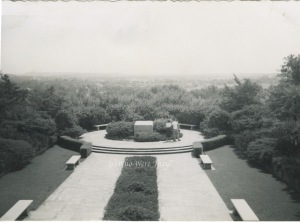 This picture shows the sunken tomb where Will Rogers, his wife and several family members are buried. Though Rogers was originally interred in California, his body was moved in 1944. 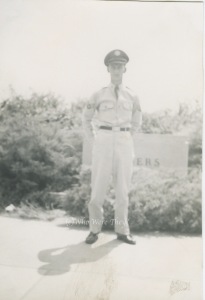 This unnamed friend of Ray’s posed in front of the sign with the name Rogers on it. Will Rogers is a famous name that most people today will not really be able to associate with anyone other than someone from the old days. I myself did not know he had been more of a vaudeville name than a early Westerns movie name. I encourage you to learn more about Will Rogers, including his Cherokee lineage. He was a really interesting person.