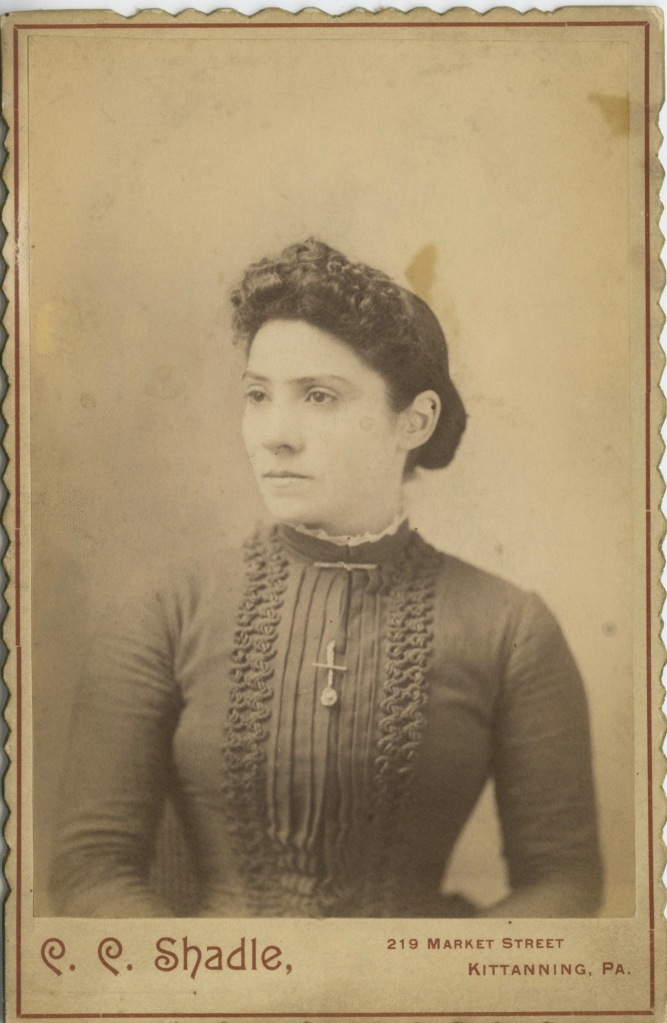 This is a gorgeous 1890s era cabinet card of Susan McSparrin, found in Tennessee last year. In the middle of the back is the name Warren written in pencil. At first I thought it might have been her married name, but I really don’t know. It could be the name of someone the card was given to, or the name of a town where she lived. Susan looks to be in her 30s to 40s in this image, and while her dress does not display the typical 1890s traits of balloon sleeves and high neck, the edges of the cabinet card are in a deckle style that was not available before the 1890s. Susan may have been a simple, conservative woman who really liked and felt good in this dress. It is also possible this is a reprint of an older photograph made for some reason – marriage or death are two possibilities.

With good reason, this is a beautiful example of understated embellishment. The front closure of the bodice is hidden in the pleats, and there are two rows of soutache running alongside that. You can see some gapping of the pleats on the lower front, suggesting that the bodice has an inner layer where it was fastened using hooks & eyes. This is not uncommon to find on vintage dresses. Note the fine lace at the upper edge of her collar. While lace today is scratchy and would probably be uncomfortable to have so close to the neck, lace at this time was made with natural fibers or rayon, so would likely have been much more soft to the touch. She also has a bar pin at the neck closure that is possibly attached to the second piece that is at her breast bone. That piece looks like it may be a watch – you can see that the chain emerges from inside the dress. Her coif is spectacular and beautiful, but again, understated elegance.

This is such a beautiful image, I am delighted to share it with you today. The photographer, C. C. Shadle, was a well respected photographer in Kittaning, PA. Born October 17, 1845 in Clarion, PA to Issac and Mary Shadle, Christopher C Shadle first was an engineer before taking up his father’s business of photography. He was in Apollo – operating in an old schoolhouse, then Tarentum, and finally settled in Kittaning in 1869. He was in business in 1865, at which time tax records show he paid the Federal Luxury tax on photographs that was established to help defray the costs of the Civil War. He paid at that time $5.80. Each photo was taxed at 10%, and there is some equation that can tell us how many photos he collected the tax on, but I get confused on how much to multiply – it was either 58 or 580. This is important because it can suggest how prolific he was. This tax was paid in October 1865. If he was paying that much per month, then we can extrapolate how much he paid in tax, and then how many photos he took per year, etc etc. (click here for more info on the tax) He was noted to have a very well appointed and conveniently located gallery in town, and also employed apprentice photographers learning their trade. Shadle also owned a farm outside of town in addition to the studio in town. He thrived in the photography business until his unexpected death in 1904 at the age of 59, which was recorded not only in the newspaper but also the U. S. Presbyterian Records. He had been a trustee in the First Presbyterian Church. The gallery was sold to John Leister at that time. Shadle was married to Jane and they had 4 children.

UPDATE: A pair of site readers have helped to solve some of the mystery! Geno let us know that the name is McSparrin, and Katie P found that Susan McSparrin was married to Charles E. McSparrin. They and their son, Bruce Darlington, lived in Dayton, PA. When I get a little bit of time, I’m going to see what more I can learn about them. Thank you, Geno & Katie P!!

Excerpt from Biographical And Historical Cyclopedia Of Indiana And Armstrong Counties, Pennsylvania, 1891 via pa-roots.org

History of Apollo, via Google Books

Listing of obituaries from the National Underwriter, vol 8, September 1, 1904, via Google Books