A sentimental duo and a young single girl 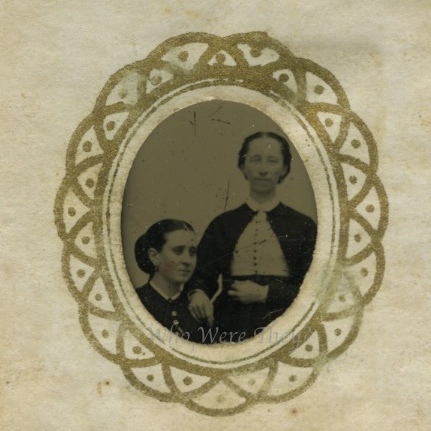 The image on the left side of the page shows two women in a comfortable pose. One is seated while the other rests her arm on the first woman’s shoulder. Their clothing is typical 1860s styling. The woman standing is wearing fashionable style that might have been made to look like two layers. Or, it could be a light bolero style jacket over a Garibaldi waist (what most people today call a blouse or a shirt), which would have been haute couture. They both have their hair parted in the center and pulled back into chignons or buns. At the time, a chignon was considered to be any style of hair arrangement on the back of the head. Today we associate that term most closely with a smooth French twist that results in a vertical roll of the hair in back.

Here we have a young lady, probably on the cusp of womanhood – which at that time would have been the late teens or early twenties. Wearing ones hair down was considered a fashion forward look for women, but a typical style for girls and teens. You can see she has her hair parted in the center as was common, but pulled to the back somehow. She has some type of band or decorative item on the very crown of her head. Her dress is fitted. Upon enlarging the image, I was able to see where the stripes in the fabric come together in a line just at the positioning of a dart on many period bodices. She has a large bow and a long necklace, as well as a brooch. Unfortunately for her, this very pretty image was spoiled by the absence of her nose, which was probably due to the skill (or lack thereof) of the photographer. He did manage to tint her cheeks quite nicely.