One face lost to time

Here are two faces peering out from the page. One is lost in the poor detail and the other is scratched across the eyes – the window to the soul, some say.

Where is her mouth?

This image is probably a reprint – or more correctly a photograph of – a daguerrotype. They hair style and general characteristics of the image lead me in that direction. During the 1840s and 1850s, women dressed their hair in such a way that it wrapped around their ears and then toward the back of the head. Hair was parted in the middle and oiled so it would be smooth and shiny. Also a hint, the backdrop of the image seems to fall away from the person’s body, which is something I have noted in daguerrotypes. Unfortunately, the original image might have been light, and in the remaking of it, much of the facial features were underexposed. If you look closely you will eventually see the chin, jaw and mouth appear in the face. 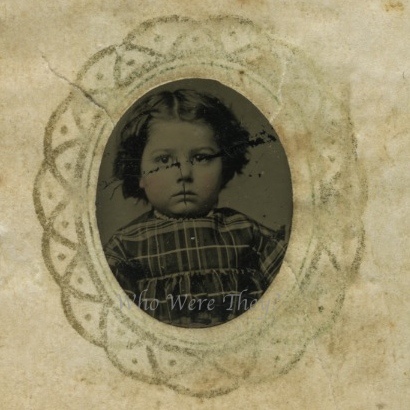 Juxtaposed with the lady above is this plump little face of a toddler girl. The center part in her curly hair tells me this is a girl. The cheeks of her face were tinted with a touch of pink, and while some people on the internet will swear that tinting is an indication of a deceased subject, this image clearly shows a bright eyed, living child. You will notice that the plaid on her dress is the same pattern as our previous child, shown here. A clever mother used every inch of yardage making these dresses for her girls. I imagine they were very lovely together!

I have been very curious about the tools used by photographic artists to make the tinting on these tiny gems and other small images. Working on the theory that they learned their trade from portrait artists who also painted miniatures, I looked into how to paint a portrait miniature. The art is still alive today, although very niche. I found a really interesting article about painting a miniature portrait here.

I’d imagined the size of the brushes to be quite small, so I looked at art supplies online, only to find that the US Department of Fish & Wildlife is causing some difficulty for artists by blocking the importation of brushes made with sable hair. Most US suppliers are out of stock of these high quality brushes with extra fine tips. From what I could gather, the brushes are hand made, and so there will be some variation to size and shape of the handles. Wow. I had no idea a simple paint brush could be so controversial!