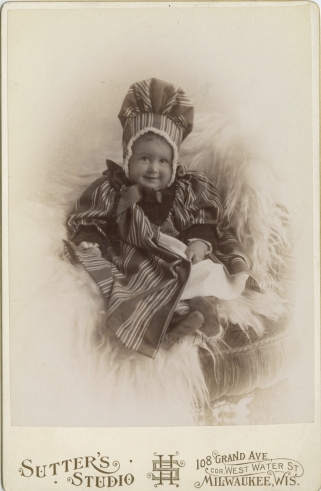 This small child photographed at Sutter’s Studio in Milwaukee, Wisconsin, is wearing an ethnic costume, likely from Poland. After 1870, Polish immigrants were second in population to German in the city. There was great promise for jobs in the city’s industrial area. According to The Making of Milwaukee, the Polish neighborhoods were known for small houses and large churches.

The reason I think this might be Polish is that the bonnet is distinctive in its style and the way it is worn. I found one other photograph that came up when searching for Polish traditional costume. Being as there are something like 25 distinct ethnic areas and costumes in Poland, one match is a great stroke of luck!

There are other similar styles as well, but none of them had the distinctive poufy portion of the bonnet. Anyone with additional information about this type of costume is encouraged to comment.

The photographer was Mrs. Helen Sutter. She was known to be in business in the 1890s, per the city street directories. I could not find much else about Mrs Sutter.

One thought on “Silly hat”