I was late for Sepia Saturday this past weekend. Sometimes, there are just too many things going on and they get in the way of my other responsibilities, er, I mean, hobbies. Anyway, I still wanted to share these photos with you. They were all in a batch of photos I found on ebay, and these all look like yearbook photos to me, the type you exchange with your friends and carry around in your wallet.

Not the best photograph of Lenore. The name is scratched into the photo across the chest and is visible when the photo is turned against the light. The photo is roughly 2″x2″. 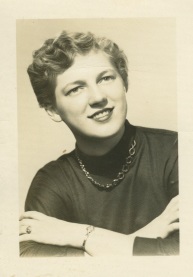 This one looks like a 1950s photo to me. It’s a standard wallet sized photo.

The name was written on the upper left corner but no ink remains, if it ever was there in the first place. The impression of the word is visible when the photo is turned against the light. The photo itself is about 1.5″x2″.

Possibly part of the same school as Joan above, the photo is not identified, but is the same size and the backdrop is similar.

Another wallet sized photo that was not identified.

The name is either Lara or Zara, I can’t be sure. Lara seems more plausible. Another small image, only 1.5″ by 2″.

This one is my favorite because Loretta looks like a lot of fun somehow. Her cap says “U.S. something” and the writing is backwards. This particular image is a tiny bit larger than the previous, maybe 2″x2.5″.