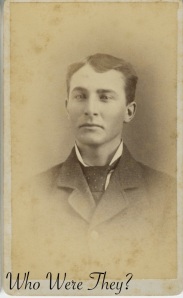 Today’s post features a CdV made by the Ensminger Bros studio inIndependence IA. Jefferson and Madison Ensminger were prolific and successful photographers in Iowa, and the sons of a photographer who taught them the art in Ohio. They are known for a collection of photographs they took during the Spanish-American War that is now housed in Florida at a university. The Buchanan County Historical Society has a nice write up on them, including a photo of their studio. Hopefully this gentleman received a sitting worthy of a famous studio! The studio was opened in the 1870s and remained ther at least through 1885. At some point they removed to Florida for their war photographs. The war took place in 1898.