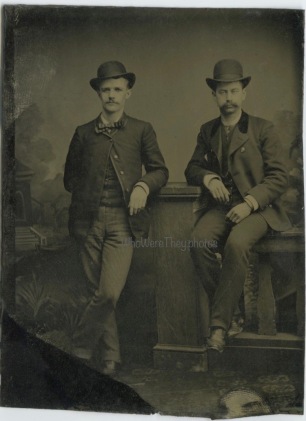 This later era tin type features two gentlemen in their Sunday best. I believe this to be an 1880s or 1890s image based on the prop used in the studio. Later in the century, photographers added various props and at some point the faux wall or fence became very popular. I have seen this type of prop used in the 80s and 90s quite a lot.

Note their fine attire – a coat with a velveteen lapel; the nice band collar on the right-hand subject; pinstriped trousers on both subjects; a wide, striped tie on the left-hand subject; and of course, both men sport nicely shaped bowler hats. These were a very popular style for many years, beginning in the mid-early 19th century and into the 20th century. Do you see any other features of their clothing I missed?

Also of note is the partial fingerprint of the photographer on the lower right edge of the metal. Look directly down from the right-hand subject. It should also be noted that the lower left corner was not processed correctly which prevented the image from rising on the plate. It’s possible the plate was not submerged completely in the chemical bath.