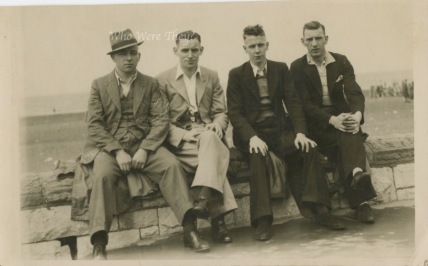 Here’s a photo from the collection that gave us Donna Anspoch. The subjects are unnamed. Four men sit on a low wall, somewhere. It looks a bit like a sea wall or a lake wall. Can anyone recognize the shoreline in the background? It’s nearly impossible, I’m sure, but I know some of you like a challenge. Note that only one man wore a hat. Hats were generally accepted as part of the daily clothing for men and women up until the 1950s or 60s. My father always had a hat until he was out one night and someone took it off the hat rack. He just didn’t bother to replace it. End of the hassle of keeping track of your hat.

One thought on “Four Unnamed Men”