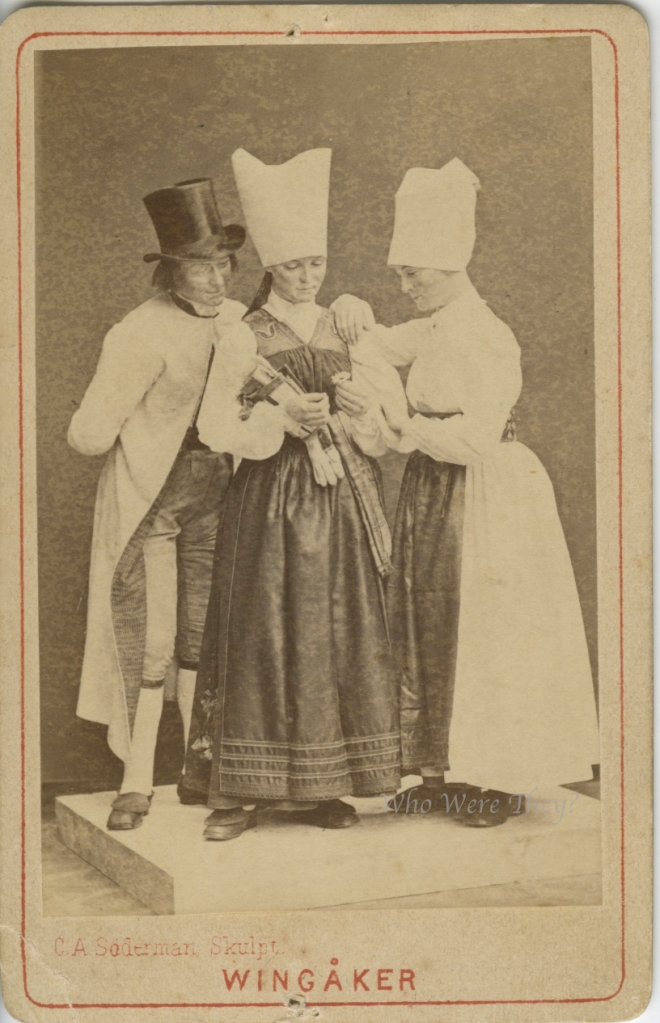 For your review is a fine image of the ethnic costume of Wingaker Sweden. Wingaker, or Vingåker as it is found in English language, is a town in the central southern third of Sweden.

I found images in the Cycopeadia of Costume that are quite similar to the dress on the middle subject of this image. The apron worn over the dress and the high cap she is wearing is referenced as “ordinary clothing.” I can assume this to mean every day clothing, but the author of this resourceful book spent literally half a sentence on the costume description, unfortunately. I would happily take input from anyone who knows anything about Swedish ethnic clothing, the linen caps, or anything else that can enlighten us.

The studio is once again Eurenius and Quist of Stockholm. There is faint text that references C. A. Soderman, Skulpt but I am unsure how that relates to the studio. Perhaps Eurenius and Quist purchased the image or licensed it from Soderman. I have no clue.

This photo and the previous one of the Norwegian clothing both have a faint pencil mark on the back that says MP but I have no idea what that means either. I wish I had been able to find other photographs by the studio or that referenced MP. It seems like they were once owned by the same person for some reason.

A Cyclopedia of Costume or Dictionary of Dress by James Robinson Planche, Publisher William Clowes and Son, 1879, pp 346

One thought on “Costume of Wingaker”