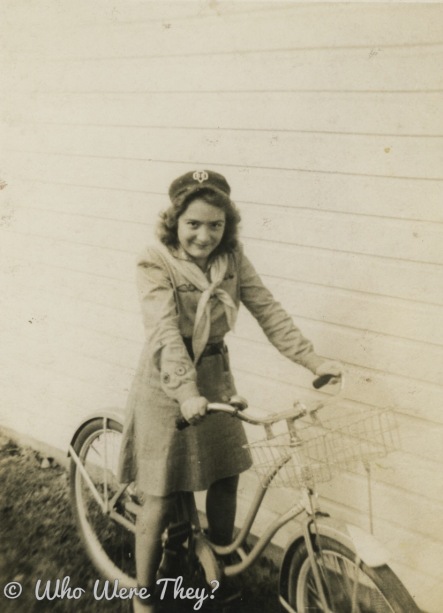 These three images of an unidentified girl in the 1940s or 1950s feature her Girl Scout uniform and her bicycle. I have no information about where the photographs were taken, but I am assuming they are American.

The uniform looks to be a Cadette uniform, which was the third level of Girl Scouting at this time. First level was Brownie, then Junior, then Cadette or Intermediate, then Senior. Each level had classes, such as first and second class, and these were earned through projects and actions to make the world a better place. In later years, these were changed to various named awards. Second Class was split into two awards in the 1960s and these were Sign of the Arrow and Sign of the Star. First Class was split in the 1980s into Silver Award and Gold Award.

Even though my daughter’s event has passed, I am going to continue this series because I have so many wonderful images! I hope you will check back for more and that you are enjoying them. I know I am!

One thought on “A Girl Scout and her bike”