After quite a lapse with holidays and vacations, I am back to give you what you want – vintage photographs! I realized recently that what got me started with this site (aside from encouragement from Far Side of Fifty at Forgotten Old Photos) was the mystery of photographs found in albums or shoeboxes, stashed in drawers and attics, then forgotten as newer technology and generations came along. Albums passed down through the years that were so pretty no one wanted to write on the pages. They always figured they could ask Granny who was in the picture….and then Granny wasn’t there any more. We had a little album like that in my family. It sat on the entry way table next to an antique lamp, on a doily, and one day the album just wasn’t there any more. I stopped thinking about it for many years. I think this is how so many lovely photograph albums that were once so cherished become set aside and forgotten.

And that brings us here. Those of us in the vintage photography sector are enthusiasts who see the beauty in these old photos. Where others see an old picture that isn’t in color, isn’t always in focus, may be small or scratched…we see an heirloom, a valuable memento, possibly the only image ever of a person who lived over a hundred years ago. That mystery of who is what keeps us coming back for more. So I am going to try to refocus my vision on what brought me here. A photo album with a group of unknown people.

This particular photo album I have had for a couple years, but couldn’t bring myself to work with it. It is, in a word, disgusting. Not the contents, but the smell. The previous owner did not disclose that the album reeked of cigarette smoke, and is in fact so tarnished with nicotine that it’s brown and black, where it originally was green and black! Such is the chance you take during an online auction, buyer beware, but still….a seller should really disclose something like that. I have been airing the album out for the entire time I have had it, and finally took a chance on handling it. Let me just say that I washed my hands immediately after I finished scanning photos and taking pictures. :-( 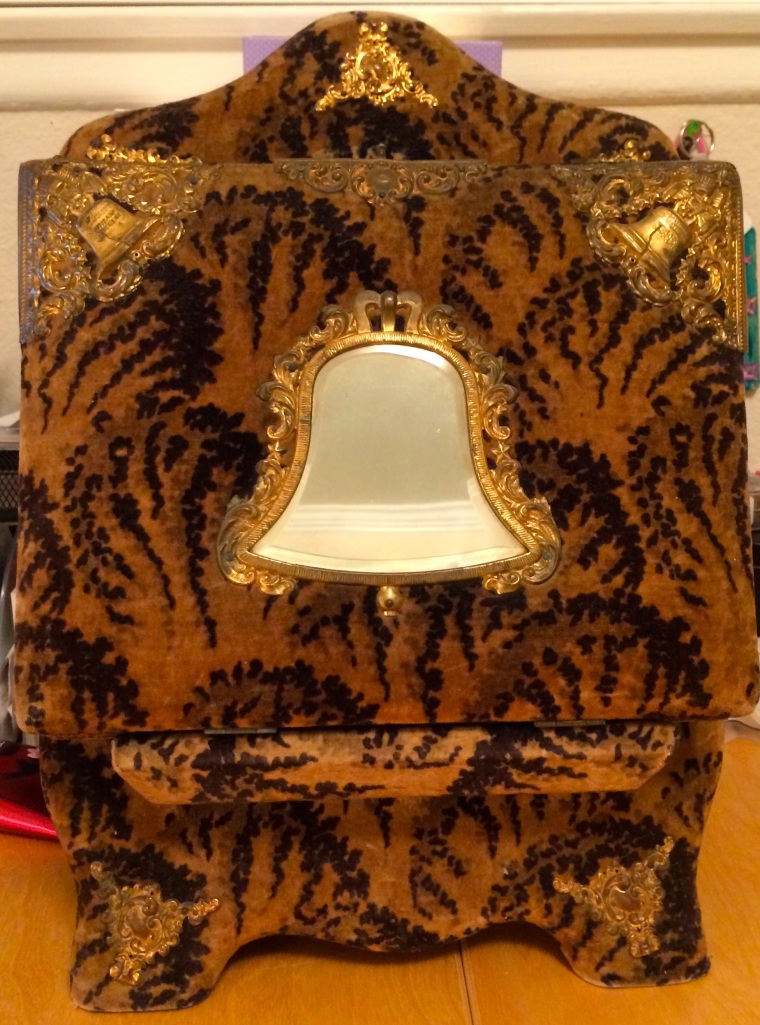 Anyway, somehow the photos inside were protected from damage, thankfully. The album is a cabinet type, in that it stands up and the album pages open out toward the person viewing them. It features a mirror in the shape of the Liberty Bell, as well as two emblems with replicas of the famous bell on them. The velour is not rubbed off in any way, just discolored.

Once the album portion has been opened outward, you can see how green the velour once was. There also is a mirror inside, which in this case you can see has slipped out of its holders and exposed about two inches of a page from the Bible. I’m not sure yet if that is because the original owner was just using anything they had to keep the mirror in place, or perhaps they were religious and that particular page meant something to them. (The black object you see in the mirror is my iPhone taking the picture.)

Here you see the full album opened, with a faux burl wood interior and several pages for photos that will open forward for viewing. While there are openings for 60 cabinet cards and 15 CdVs, there are only 28 photos present. The photos appear to be from the 1890s and early 1900s. I featured one photo quite some time ago for a Sepia Saturday post. It shows a handsome fireman, and that was one reason I bought the album! Over the next 28 posts, I will show you all the photographs enclosed within this stinky album, lost but not forgotten, for we now can ask the question of who they were.

5 thoughts on “Back to basics”