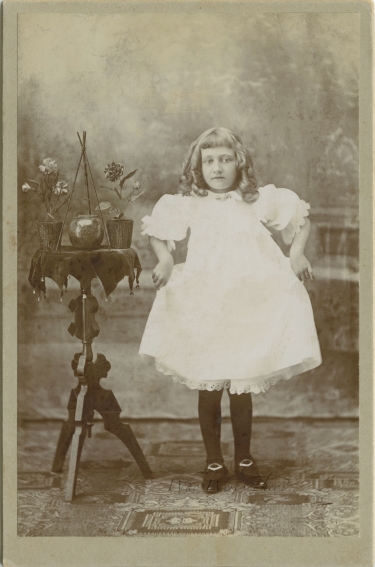 From the late 1880s-1890s, this cabinet card shows a pretty young girl showing off her dress. She is nicely groomed with curls, a fancy dress with lace trim, black stockings and shiny black shoes with buckles on them. I learned recently about an interesting aspect of 19th century photography, which is that colors photographed using wet plate technology do not photograph the same as our modern technology. For instance, a modern yellow dress would photograph as gray or white using modern photography (e.g. modern black & white film). However, a yellow dress photographed by a wet plate camera would photograph as dark gray/almost black! I found a fascinating article about this on The Sewing Academy, a website dedicated to reproduction sewing using historical techniques. So, while this young girl’s dress is most likely white, this new information casts a whole new light on the clothing in every other 19th century photograph I have seen. Reds photograph as black, greens photograph as shades of dark gray. Blues show up as light gray.

I recall a previous photo I posted which had written on the back “gray and orange.” I am going to have to reevaluate the dress with this color information in mind!

2 thoughts on “Show your skirt, love”