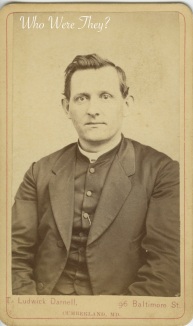 I know that sometimes my first impressions on these photos aren’t the most flattering, and such is the case today. This poor fellow’s ears stick out, and that reminded me of the old saying of the “taxi doors are open” to describe someone with this affliction. Isn’t it interesting to ponder what life would have been like for those who simply lacked the ability to surgically alter parts of their appearance they didn’t like? This man could not have his ears pinned back. People did not change the shapes of their noses, lips, chins, or breasts. They lived with their appearance. Certainly, they weren’t obliged to like it, but there wasn’t much they could do about it, after all, so they just dealt with it.

This particular photo gives us more of the name of the photographer…T. Ludwick Darnell. Previous cards named him as T. L. or even simply Darnell. Perhaps he didn’t much like his name and was playing around with it to find an arrangement that suited him best, since of course, he couldn’t change his nose or ears.

One thought on “Open taxi doors”