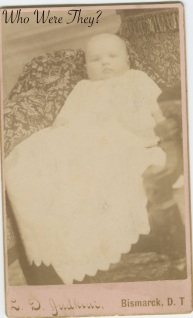 This little guy is Franklin Francis Ford, age four months, weight 22 pounds.  He’s a good size boy at four months. Franklin (Frank) was the son of Elias C Ford and Belle Kirby Ford, born July 11, 1883 in Dakota Territory. The Fords were a travelling family. Elias C was born in Ohio, his wife in Wisconsin. Daughter Sarah born in Wisconsin, son Elias K born in Wisconsin, Frank, in DT, Lillie Mae in Washington, and Arthur in Washington. Eventually, the family migrated to Oakland City, CA and Frank settled in and around the area, living in Ophir, Oroville and Butte in Butte County and Berkeley in Alameda County. Frank was a farmer and real estate office manager. He married Nellie Lorinda on the last day of 1910 and they were together until his death in 1946. Nellie lived until ’53. They did not appear to have had any children. However, I have a great lead on a family member, so keep your fingers crossed!

The photographer was Judkins in Bismark, DT.