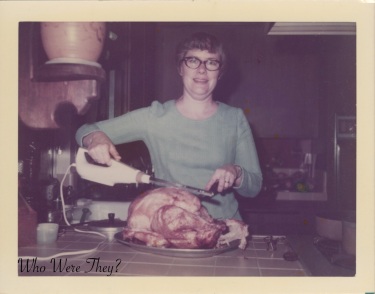 For this week’s Sepia Saturday I have a photo from the 1970s of my mother carving a turkey. From the perspective I believe my sister or I took the photo because she is looking down at the photographer, i.e. a little kid ha ha. Her note on the back of the photo says the turkey was very good, stuffed and cooked on the barbecue. I imagine it roasted quite some time on the spit, slowly turning it round and round. Mom used an electric knife for many years, until she was given her father’s ham knife, and then it was over. To this day I ask her to carve the turkey at Thanksgiving dinner. Mom is a great cook and loves to entertain; they are known for their many parties and great meals that brought together family and friends throughout the year.

The turkey was the centerpiece to our Thanksgiving dinner, but we had turkey for many other meals as well. This could have been any time of the year, really, and we never discriminated what meal would feature which dish. For many years, we enjoyed a Christmas dinner of Kara Age (ah-gay), which is Japanese for “browned chicken.” The chicken is cut into bite sized pieces, then marinaded in a wine & soy sauce mixture over night; finally it is dredged in corn starch and cooked in hot oil in a wok. We are not Japanese, but this is still a family favorite.

This photo was taken before they remodeled their kitchen in the late 80s/early 90s. The counter tops were 4″ avocado green tiles and we used a small brush to clean the grout in between – and there was a large counter/bar where we ate breakfast in the morning and lunches on the weekend. I wish today that I had a kitchen laid out half as nicely as hers was. She had lots of counter space, a nice double sink, and a double oven!

For more mouth watering photos of holiday foods, click the button below, then jump off the deep end and into the mashed potatoes and gravy.