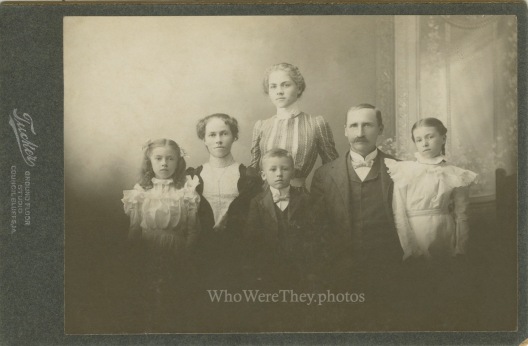 Today let’s look at this family. Their fashions look to be 1890s style dresses, although younger girl fashions are not my specialty. The photo is mounted sideways on a cabinet card. The back of the card identifies the family as follows:

Click the image to see the writing in pencil.

I found the family and identified “Dad” as William Busse, born in Germany or Prussia in 1856 and emigrating that same year. In 1885, he married Allie Jenkins. They grew their family with Mabel in 1886, Ruby June in 1890, Dolly in 1892 and Raymond in 1895. Note how Mable in the middle (standing) looks a lot more than 4 years older than Ruby June who is standing on the far right. The young boy looks to be between 3-5 years old, limiting this photo timeframe to 1898-1900. Presuming the photo was made in the later 1890s, say 1898 or 99, Ruby June would have been 8 and Mable 12. Mable does not look 12 years old to me! It is also possible this photo is from a couple years later after the turn of the century, and the photographer was using old stock cards.

Over his life, William was a store clerk and policeman, as well as a seller of farm implements and carpenter. The 1890 census was destroyed so we don’t know what he was doing in that decade. Some of the children appear to have had their own families, so hopefully someone will contact me and I can give them a family reunion!

The photographer of the image was Tucker, on the ground floor in Council Bluffs, IA.