To commemorate the beginning of the London Olympics, Sepia Saturday is celebrating sports! While my family loves sports and many of us have participated on various sporting teams, I can’t find a good old baseball picture. Instead, I found among the photos my cousin scanned some unidentified family & friends in Ocean City (presumably New Jersey). Based on the ladies’ bathing costumes and hair styles, this photo might date from the 1920s. Gents, wouldn’t you love to strut your stuff in one of these fine bathing suits? 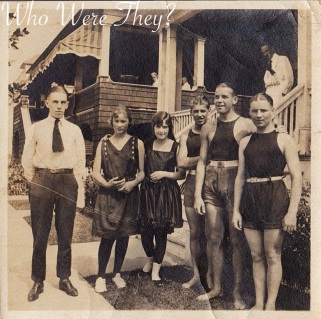 This past weekend I was out playing 1860s, meaning I was at an American Civil War reenactment, selling booklets, teaching period crafts to children, and celebrating history. One of our most popular booklets is a reproduction of the 1860s unified rules of baseball. Prior to the 1860 convention, baseball clubs followed regional rules, or even created their own rules for their particular home field. This caused much consternation when a visiting team violated a local rule without even knowing it. With the popularity of baseball taking off, it was decided that unified rules were a good idea and would enable more fair play among teams. This led to more travel between cities and states and led to the formation of the National Association of Professional Baseball Players, American League, National League and eventually modern Major League Baseball. Some of the best debates in our shop have to do with who created baseball and was it an evolution of rounders or not! Rounders was a known English game consisting of bases, a ball and a bat or stick, played in America from the 18th century at least. Also, early baseball was claimed by Albert G Spaulding, but was it just because he created the first standard ball? Or, was it truly invented by Abner Doubleday, even though not attributed to him until 15 years after his death? Spaulding was a smart business man and decreed in his “official rules” of baseball that only a Spaulding ball could be used, claiming all other balls inferior. Hm, sounds like someone gamed the system to me.

I hope you will visit Sepia Saturday where you might find cricket (English baseball, haha), games, sports and who knows what else.