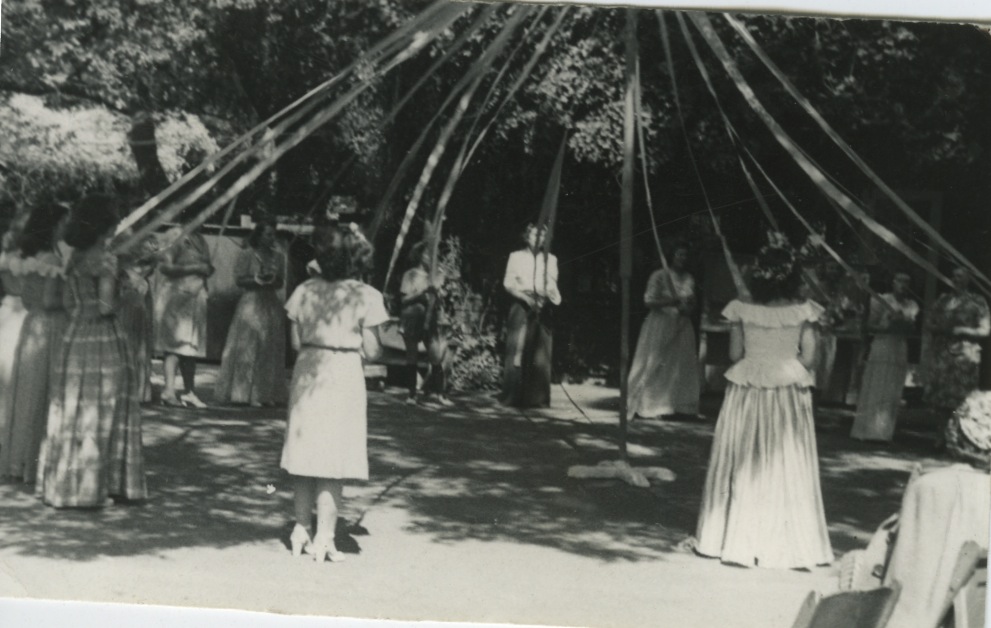 No, not “mayday, mayday” this is May Day, both capitalized. In honor of the first of May, which is coming in a few days, let’s look at a lovely photo of young people prepared to dance around a May Pole. First – you knew this was coming – a little history. :-)

In Europe and the British Isles, May Day was traditionally celebrated with great gusto! The old religions recognized May 1st as a turning point of the year. Beltane was the celebration of new growth and yes, fertility. The crops were planted and they hoped for a bountiful harvest. The lengthening days of spring warmed the earth and signaled the coming of summer. When the Romans entered Europe and Britain, they celebrated at similar times of year and co-opted many established local holidays as their own. This happened with Beltane. They turned it into the festival Floralia, a three-day romp to honor the goddess Flora – goddess of flowers. Timing couldn’t have been more perfect, because May flowers are bright and beautiful pretty much wherever you are in the world. In many parts of England and Europe, May Day and maypoles, maypole dances and festivals continue to this day.

America was founded by Puritans, which was a huge bummer if you weren’t as strict as the colony leaders were. May Day and all its rituals was frowned on as impure, not honoring God, nasty. There is some speculation that the maypole and its dances were tied to fertility rites. (Come on, a bunch of young men and women dancing around a big pole sticking up out of the ground? No way is that phallic!) So the Puritans did everything they could to discourage May Day celebrations. There is a citation from 1628 when Plymouth governor William Bradford wrote scathingly about some indentured servants who broke their service agreements and started a new colony. Those people dared to set up a maypole and dance around it. By the way, this little colony of brash servants was called Mount Wollaston but the dancers changed the name to Merry Mount. It exists to this day, now known as a little burgh called Quincy, MA. Two early presidents of the US were from that town, and also a statesman you may have heard of….John Hancock.

So, in America we tend not to celebrate May Day with any sort of fanfare. I can remember making little bonnets and baskets of flowers for the elderly, but it wasn’t until I was in my 20s and visiting a Renaissance Fair that I saw an actual maypole. The photo above is anonymous, in that no one is named, not even a location noted on the back. The young women are all wearing nice dresses and each is holding the trailing end of a streamer attached at the top of the maypole. If there was music played, or even just if there was singing, the women would have danced a weaving dance around the pole, winding their streamers in and around one another.

In recent American film, a maypole is seen in the kingdom festival scene of the Disney movie Tangled, at which time Rapunzel and Flynn arrive in the kingdom and dance together.

This post is part of Sepia Saturday where the theme is generally maypoles, and be extension, May Day, dances, celebrations, etc. Click over to experience the virtual celebration of May Day, spring and the coming of summer.

Dance of the internet