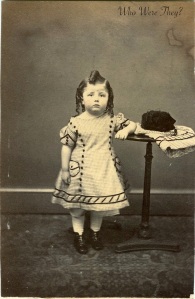 These adorable children are brother and sister. Their dresses coordinate. The boy, on the right, is younger than 5 years old, as that was the typical age boys went into short pants and no longer wore dresses. Modern conventions that boys not wear skirts or dresses are from the 20th century, although I don’t know what brought about that change.

Something else about these CdVs is very interesting. On the backs of both photos is a revenue stamp. 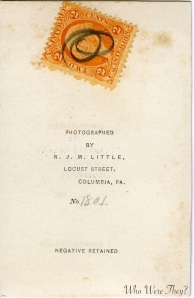 The revenue stamp was affixed by the photographer and then cancelled in some way, either with the photographer’s initials, an X, or hand stamp, and sometimes included the date. These stamps were cancelled only with a scribble, but we can date them as having been taken between 1864-1866. The stamps were part of the Federal Government’s fundraising efforts to pay for the Civil War. The 2 cent stamp was applied to photographs costing up to 25 cents.

8 thoughts on “Brother and sister”